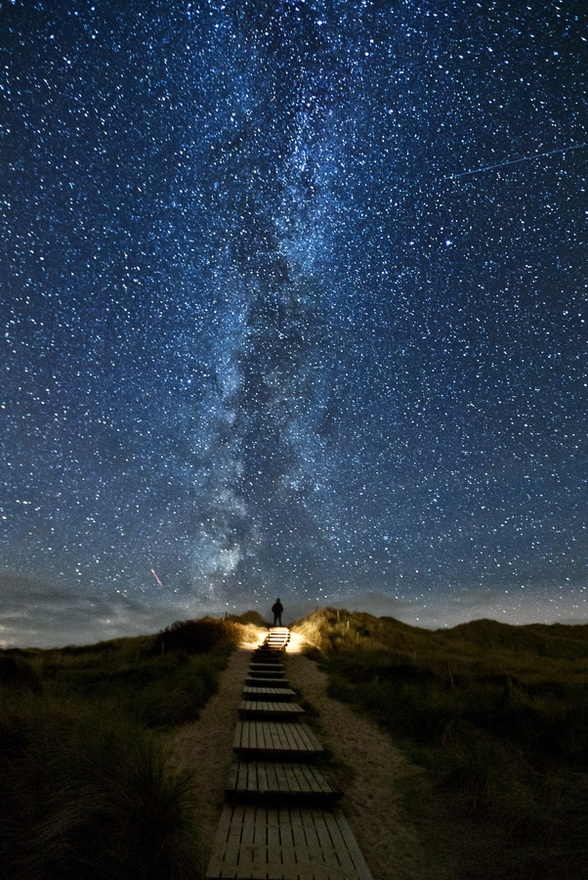 An insane drummer hammered inside his chest.

His lungs were sacks of burning coals.

Rot and ruin slain by hammer and knife.

Moan and groan. Shuffle and stagger.

The dead no longer tell tales.

Where hundreds stood thousands will come.

Flooding the beach ahead of the tide.

They had stood together. Once.

His friends. His brothers in arms.

Crusaders united against the walking dead.

One by one they fell. Dragged beneath a sea of arms and teeth.

They fled through familiar territory transformed and abused.

Side by side they battled on.

To warm wooden paths amongst the dunes.

Sinew and muscle sliced and diced.

A plea for help swallowed by foul breath and demon eyes.

Pushed toward the shore. Hope for rescue chewed up. Spat out.

Yet still he swung hammer and knife.

With his spirit dying he resisted their blood lust.

Until the last of the dead lay still and oozing.

In silence the stars came out to greet him.

At the end of the board walk he gazed at their beauty.

Arms raised to the heavens he awaited their applause.

A single moan drifted through dunes.

Hammer and knife. Hungry for blood and sinew.

The stars could wait.

At least they would not abandon him.

This short piece was inspired by Indigo Spider’s Sunday Picture Press – a challenge to write between 50 and 1500 word piece of fiction using one of 5 photos as a prompt. The twisteroo this week was to write a piece about abandonment.

This week I’m back with the zombie hordes and keying this short poem (if you can call it that, I’m not so hot when it comes to poetry) with my novel, The Range. I wasn’t in the mood to write an actual piece of fiction this week. I wanted to keep things short and sticky so what better way to convey horror and abandonment than with short bursts and one liners.

Maybe it worked. Maybe it didn’t. I can’t really tell. I really enjoyed my previous SPP piece, Just Beneath My Skin I’m Screaming, but this one…well, I’m sure if it sucks you’ll let me know, dear blog reader, right?

Excellent picture prompts from Indigo. If you want to join in and write a short piece of fiction clicky-click Indigo Spider’s link above and wrap your imagination around one of the pictures.