Pretend for a moment there’s no such thing as racism and never has been. Take a look at the picture on the left. What do you really see?

FHM Philipines have pulled the cover of their March edition because anti-racist idiots say it’s racist. I’m shocked that public sensitivity has reached such stupid heights and that knee jerk reactions by small-minded morons are taken seriously.

I’m not racist. I don’t see the point. I understand what the term means and how it should be taken seriously when necessary. However, even before I read any of the news stories or video footage of Bella Padilla (in the centre of the photo) apologising for the shot, I saw the cover as a simple photo shoot. A glamorous and glossy photo. Nothing more.

The magazine was using light skin set against dark skin to emphasis one person. And one question that come to mind is this:

If it was a black-skinned model surrounded by white skinned models, would the reaction be the same?

Nope. It wouldn’t. And this is because people are taking racism way too seriously. According to London’s The Telegraph, one Twitter user wrote: “DISGUSTING representation of #colorism and #racism in the Philippines!”

No it isn’t! Just because someone thinks that way it doesn’t mean that’s how it really is. I watched a news clip on BBC where the news caster (sorry, I don’t know her name) asks Bella Padilla that when she saw the picture with the models why alarm bells didn’t start ringing? http://www.bbc.co.uk/news/world-asia-pacific-17196449

Why would they? Why should they?

Alarm bells should really only start ringing when you see that photo if you are in fact overly sensitive about racism. It’s just a fucking photo!!! I’m very angry that BBC news reporter has an accusatory tone of voice, and she makes it sound like everyone else on the planet can see the photo is racist except FHM and Bella Padilla. The reporter then asks Bella that when she was surrounded by black models, it might have given her a clue as to how it might end up looking.

WTF? We don’t all spend every waking moment worrying if what they’re doing MIGHT be considered racist. Because we have better things to do. For many people racism doesn’t cross their minds because for them it isn’t an issue.

FHM were doing a photo shoot!! It’s plainly obvious to anyone with half a brain that racism was not intended. And the caption “Stepping out of the shadows” isn’t racist either. I didn’t read it like that at all and I’m sure plenty of other people didn’t.

Anti-Racists need to climb down off their holier-than-thou bullshit perches and get a fucking clue for just a second. This has been blown way out of proportion by a few idiots at first and then joined by other idiots who don’t have an opinion of their own. Only hours after the cover was revealed, over 300 turds signed a petition at Change.org for FHM to dump the shot and make a cry baby apology.

You know who those 300 people are? People who’ve got nothing going on. I wonder if I made a petition entitled: “Keep FHM Philipines March Cover The Way It Is Because It Simply Ain’t Racist” how many people would sign it? More than 300 I’m sure.

So, after my mini rant I’d like you, dear blog reader, to take a look at some of the photos below and tell me if they’re racist. If the consensus is to be believed about the FHM Philipines March cover then any other photograph taken showing black and white skinned people together MUST also be considered racist. 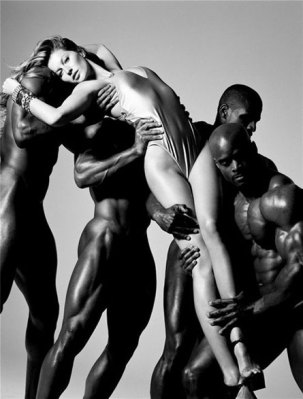 Is this photo racist? It looks virtually the same doesn’t it? I don’t see it as racist. I see a slender model being supported by quite muscular men. Their partial nudity appears to have been used in order to enhance or highlight their physique, lending to the idea of strength. The main thing I see here is a shiny swimming costume, all the rest is unimportant. Yes the contrast between dark and light is very obvious but the reason isn’t racist.

Again, if this image were reversed, a black-skinned lady, or man, supported by white skinned men or women, would there be a similar reaction? It bloody well shouldn’t because it’s JUST A PHOTO!!

There’s absolutely nothing wrong with comparing skin colour or using it to show a contrast. It’s only the dick heads of the world who say it’s wrong. We should be celebrating our vast richness of colour around the world not reacting to a set of rules imposed on us by society or what experts say. No one colour is better than another. Period. 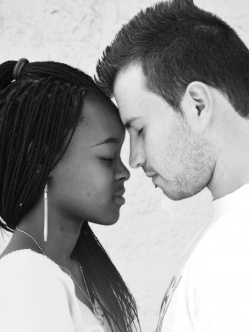 Is this a racist photo? Why? Why not?

And how about this photo? Do you see any racism there? I don’t. I see a couple enjoying the sun. Naturally the anti-racists out there will scoff at this, I suspect, but in the end it’s just a photo! You read whatever you want to into it, and a lot of how you judge things like racism is due to what society tells you and conditioning from birth.

If there was a magical pill that erased every last memory about racism for every person on the planet the world would be a very different place the next day. There’s a lot of harm that comes from racism but equally harm can come from pathetic over reactions like this. My advice is to check your head before you rant about something. I did. I spent a few hours mulling over this post before I started writing so it wasn’t a knee jerk reaction.

That’s it. My rant is over.

33 thoughts on “That’s not Racism you morons!”