This one was a bit more tricky than the Zombie version as I needed to rob a lot of different graphics from many websites. The hardest part  (or most time-consuming) was creating the overlay (the dark borders with the coil crests) and the parchment backing. Some bits I have yet to gel together properly but it looks okay for the time being.

EDIT 22nd June, 2012: I’ve just posted a new version of my World of Warcraft Monopoly board, click here to check it out.

I decided to keep the board to the original Warcraft game without venturing into any of the expansions, so there’s plenty of scope left to create Burning Crusade, Wrath of the Lich King and Cataclysm Monopoly boards. The graphics I found on WoWPedia were very useful as there are numerous .PNG files that I used that I didn’t need to edit out the backgrounds.

I tried to keep the streets in order of player/zone level eg 10-20, 20-30 etc, although now and then I strayed from this in order to use a good image. It’s hard to find images that look good when scaled down. Also I didn’t want to just use screenshots from the game and used original artwork wherever I could. The artwork itself ranges from the WoW Trading Card Game to original WoW art and also fan art.

I’m particularly happy with the Spirit Healer used on the Free Parking place. The stations are dungeons and I also liked the Barber Shop/Postal Service ideas for the utilities, although strictly speaking the barber shop feature didn’t appear in the game until Wrath of the Lich King, but hey, it’s my board, my rules!

The fonts I used where Morpheus for the main text around the board and LifeCraft font for the GO, both are freely available on the net, just Google them. Due to the amount of colour on this board I decided to use a white colour for the fonts to make them stand out, works quite nicely too.

All the images I used were freely available online. They were reduced in size, cut, pasted, enhanced etc. I’ve kept Community Chest and Chance but changed the images to ones easily recognizable by WoW fans. I’ve posted the entire board for you to take a look at.

Below you will see the complete board. Click it to view the hi-res version – it’s a big image and large file size too, but it looks sooo good! 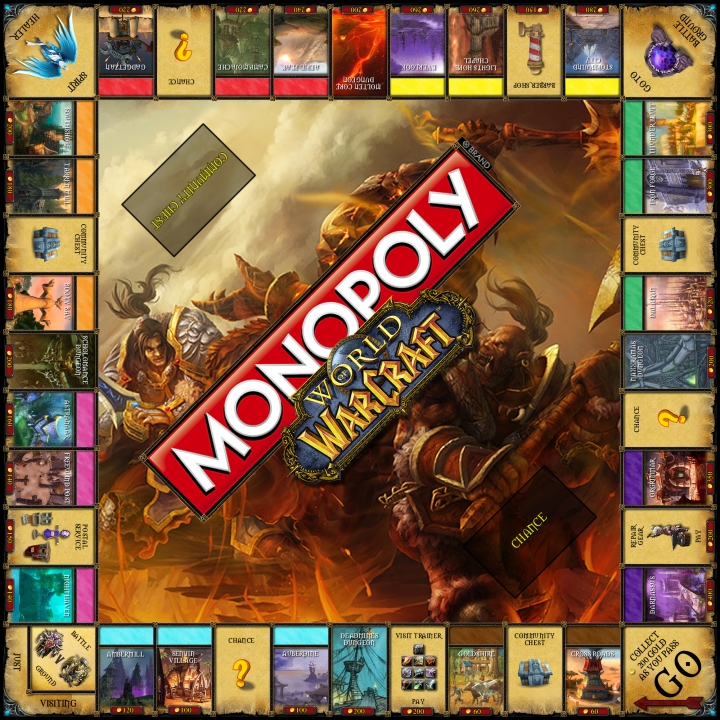 I gave some thought to the houses/hotels as I was making the board. I thought it would be cool to have a standard Alliance house or Horde Hovel as houses and then either a Stormwind Keep or Orgrimmar gateway as hotels. Playing pieces would be cool to design too, plenty of ideas for those – swords/shields, race players, class icons like the ones on the Visit Trainer place.

Not sure I’ll rush into another World of Warcraft board just yet. I’ll try a different genre next, was thinking perhaps a Terry Pratchett board or perhaps even a Call of Duty one. I’m really pleased with how this one turned out, it has been a labour of love and no mistake!

27 thoughts on “World of Warcraft Monopoly!”