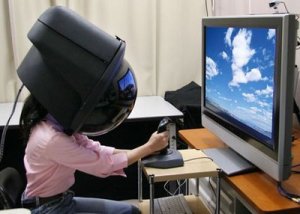 Sometime during the 90’s (or thereabouts) there was a lot of  discussion about Virtual Reality (VR). It was heralded as  the next big thing for games, science, communication,  space  exploration, engineering, medicine, and so on. The uses were limitless, so we were told.

I watched Tomorrows World on BBC1. The presenter wedged his nut inside a VR helmet and moved his head in an overly theatrical way. He was looking around a virtual world, one that we could only see in 2D on a screen behind him. Using a glove laden with sensors it was possible to manipulate virtual objects. It looked very exciting. The tech-heads were licking their lips at the mind boggling possibilities the future held. Just around the corner, they said. Tsk.

I waited patiently for VR to make it’s way into the home, in the form of some type of games console addon perhaps, or something you hooked up to the PC. But it just didn’t arrive, and with so many gadgets forcing their way into our lives it was easy to forget VR. It had died before really being born.

And yet with movies like the Matrix, the idea of VR become popular once again. Virtual worlds have become quite common these days, Second Life, World of Warcraft etc are the new VR. Visitors can explore to their hearts content, but only in 2D which is a shame. Some aspects of interaction have changed, Nintendo Wii excells at shifting bums from seats and gets you moving around, as if trying to draw us through the TV screen.

Project NATAL for Xbox is changing the way we interact with virtuality, pushing the boundaries between watching and taking part. But even this isn’t VR!! In my recent post on Call Of Duty: Modern Warfare 2, I describe the feelings and sensations of being a sniper laying on a snow covered rooftop. It got me thinking; if the technology exists to produce such a high quality gaming experience like CoD or Uncharted 2 then why isn’t anyone marketing a VR headset for games machines like Xbox or PS3?

The net has its share of eshops selling VR Glasses or Goggles but they’re flimsy little things that aren’t really able to let the user become immersed in a virtual world. I want a headset, lightweight, good solid quality design, with a wrap-around screen, so my eyes can not see anything else other than the world displayed on that screen.

OR I want to see some kind of holographic projection or 360Degree video wall setup. VR should be here with us, a reality in the true sense of the word. Imagine all those games that could be made better through a different medium like VR. I would like to share with you, dear Noobcake blog fan, that a deep heartfelt sigh has just escaped my lips.

I recently read a book called Second World by Eddie Shah. If you’re a fan of VR and virtual world get yourself a copy of this book. It’s a slow starter but no way boring, but it builds into a fantastic story, rich with future-tech that could one day be a possibility.

One day VR will be with us. And what a day that will be!

2 thoughts on “Whatever happened to VR?”