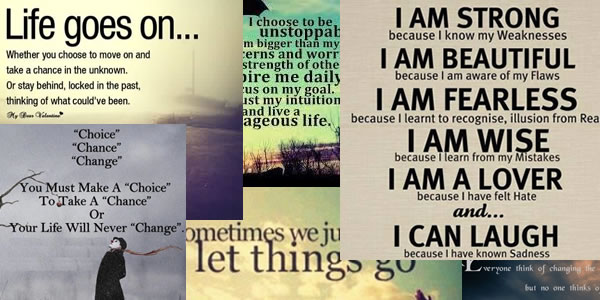 Greetings dear blog reader! This post starts with a complaint, of sorts. Not against a person as such, more directed at the internet. I like the internet. It’s fun, informative, useful, and some might argue necessary in our modern world. Yeah, we’ll see.

The internet won’t save you when the men come, with their guns. Or when the zombies are beating at your door. The undead aren’t interested in a search result, they want flesh, lovely juicy flesh. Raw and wriiiigling.

Ooh look, a meme based on what I just said. 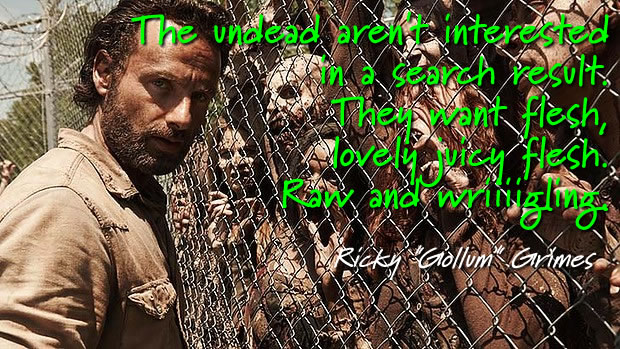 So, my complaint is about the vast number of pithy irksome life affirming memes that riddle the web these days. They’re everywhere. Social media is a dumping ground for these cute thought-provoking slithers of positivity, and I for one and sick of having them invading my eye balls.

I’ll hazard a guess right now and say that plenty of folks won’t like this.

I can imagine the replies:

“Ooh someone woke up on the cynical side of the bed this morning!”

“Oh my! Dave doesn’t like positivity. What a turd.”

“Some people need a bit of encouragement now and then, so stop being a big nasty and grow up.”

Look, I get that humans sometimes need a lift, a spark of something positive to get them through the day. And I don’t doubt that many people offer these snippets to show they care.

What really grinds my gears is the insincere motives behind how they’re shared. They’re no longer thought-provoking. Their meaning has little impact these days because, like everything else, from food, electronics and music to movies and cars, they’re mass-produced garbage for internet sheep to consume like greedy image hungry pigs.

We gobble down these bite-sized morsels of cutesy feel good shite, then wantonly share them on the nearest available social blah-blah platform. These days we’re all so intelligent, deep, emphatic and enlightened that we’re driven to share our distinct uniqueness (which is the same as everyone else’s) with our “friends” otherwise they might get the impression we’re evil.

In these consumer driven days, at least ugly companies like McDonald’s are turning a profit from making us all big and fat. Their business model is working. We scoff. They make money. They use said money to create more scoff – “Now with added taste!” – and we spend more money. But these memes are like a plague. Someone, somewhere must be making money from churning these out. Right?

At first glance you’ll be drawn to the image below. It’s got a road in it. And words. That must mean the quote must have some meaning. Something deep. Read on.

What crap. It took about a minute to make that. People are churning these out every day. It’s like there’s a secret competition where people are hell-bent in spreading their feel good message of the day as far and as wide as possible.

It’s easy. Find a vaguely interesting image. Einstein or a road or a field of flowers with a sunset, slap on an obscure quote and you’ve got gold. Or better still, use a well-known quote and stick it on a picture that’s striking and “different” so internet sheep can go “Oooh, I never thought of it like that before, isn’t that amazing?”

How about a bit of Yoda with a twist? 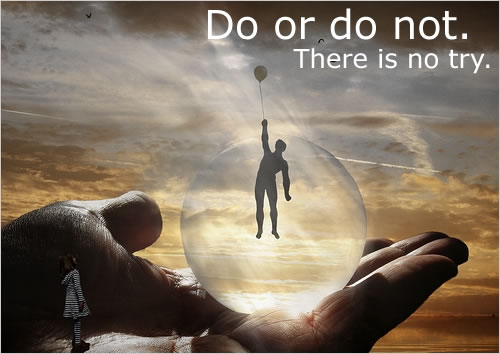 Yeah? Getting it now? Making you think, right? Yoda, smart dude or what?

Yes, it’s the slap-dash behaviour behind how we consume these words and images that annoys me, but it’s how the combination of both has cheapened the power of the words that I find disturbing. Some of the most historical and moving quotes have been dumbed down to the point where few seem to care about the original purpose behind the message, but instead are compelled to share it instantly through a self-centred egotistical desire to appear profound and deep and interesting.

The imaginary quote person from earlier was probably right, that perhaps I did wake up on the cynical side of the bed this morning.

I suppose what I should be doing is celebrating the ingenuity, bravery, courage and willpower of the human spirit when I see these images and words. For all the evil and darkness in the world, the human race has the potential, no matter how rare, for acts of great kindness, strength and wisdom.

It’s shame their legacy can so easily be summed up by a cheap image and well placed words with an eye-catching font.

All too often on social media I’ve seen people post a famous quote/image/meme and I’m 100% certain they have no idea who the famous person is/was and what the message really means. So intent are some to share “stuff” that they re-tweet/share/copy/paste/insert image here, without first taking a moment to fully realise what the words really mean, and where they came from.

I recently read Animal Ant Farm and Other Desperate Situations by Simon Rich. It’s a bit like the Far Side comics but with words. It’s well worth a read. There’s a wonderfully funny story about someone who invented a machine that could translate human words so animals could hear, and vice versa.

So this person asks a chicken what they thought about their captivity. And the chicken replies with something like:

The interviewer asks a pig what they think of living life in a prison. The pig says:

It’s a short piece and it cracks me up every time I read it.

The Dog of Wisdom.

So, here’s where you can call me a hypocrite. Go for it. I’ll take the hit. I have to share this.

Every so often I come across a video I can’t stop watching. One that baffles me and makes me laugh until my face aches. This one is weird with a capital WEIRD.

I just previewed this post to check the video worked, and I watched it twice.

Nothing more to see here.

Last weekend I went to a wedding. It was lavish and somewhat posh. For the occasion I didn’t want to be another suit in the crowd. I wanted to be different. I haven’t been at a social function for a long time where I wanted to stand out so here was my chance.

For years I’ve fancied the idea of wearing a waistcoat. Maybe with a pocket watch. So for the wedding I asked around various gentleman’s outfitters in Cambridge for a flashy waistcoat. I was told by one that “they just don’t make them these days” which means I’d have to go for a mellow inoffensive pastel blue or pink number with a slight swirly pattern.

So, as I mentioned in my last post, I was browsing the interwebs when I stumbled across tomsawyerwaistcoats.co.uk where I was amazed to find they do an entire range of amazing and fabulous designs. I was in a quandary which one to buy.

For anyone interested in such a quality item, go check out their website. First class customer service, personal emails, and they even sent a swatch of fabric to me in the post! And when I emailed them asking if my waistcoat could be made and delivered a week early, sure, no problem, it was done and posted in a few days. Amazing. I was most impressed with their personal service and courtesy.

So, wanna see me in Funky Bright?

The only downside is that I didn’t have a pocket watch, or a black cane with a gold top. That would have been ace.

Still, I had the hat. You can’t beat a good hat.

Now I’m trying to think of a reason to wear it elsewhere.

Before I leave you…

About the comment I made earlier, with zombies and their lack of interest in search results, well we’re all zombies of one sort or another when you think about it. Especially meme scoffing zombies. Damn. I should have made that joke earlier, instead of the internet sheep pig thing.

I could change it.

I won’t change it.

Anyway. That cropped up out of the blue because I’ve been busy beavering away on The Holt just lately. I’m just over half way through, and oh boy, it’s going to be a biggee. Every so often I slouch in my chair and wonder if I’ve created something of an unwieldy monster that’s out of control and too cumbersome to manage right through to the last cliffhangery word.

Ah, have I just given something away? A cliffhanger you say? Hmm, interesting.

The Holt is going to be big and meaty. At present it’s at 260,000 words, which considering the halfway mark, feels a bit much, so I’m thinking some will be chopped during the lovely editing stage. I owe a big thanks to a chap I know, we’ll call him Bob, for his suggestion over which military vehicle to use. Top job, Bob (insert smiley face) and thanks for the tip!

Yeah, what the hell.

This is from Chapter 8 – Scout. Just a snippet to whet your appetite.

The half-naked man stood in the middle of the empty street. His glistening red skin twitched as tight muscles flexed on his chest and arms. Clenched fists unfurled as his breathing eased to a steady pace. Eyes closed and face tilted to the sky, he bathed in the hot afternoon sun. A swollen tongue raked across parched lips, as if savouring the sea air. When a breeze teased the cuffs of his ragged jeans he stretched his toes and stroked them over the cracked, dry tarmac.

That’s all you get.

They’re coming for everyone.

5 thoughts on “Irksome Memes, The Dog of Wisdom and Funky Bright”