How do you think you’ll be remembered after you’re gone?

How would you want to be remembered?

For the last couple of weeks these questions have played on mind because of Roy Bullers (pictured above) who sadly passed away on 24th January 2014. He led an extraordinary life and enriched the lives of so many people around the world. And due to the legacy he leaves behind, I question how I will be remembered when my time has come and gone.

At the service tribute was paid to Roy’s life – good words spoken by good people. Whilst I could never hope to vocalise my thoughts, certainly not before a crowd, I offer my own tribute in the best way I know how, via the written word.

The Roy I knew.

Firstly, he had a profound and unexpected impact on my life, not only because of his RAF life, knowledge and passion for radar and experiences travelling around the world, but also because he was the quintessential gentleman.

And I’m not alone with that view either.

Messages of sympathy left on the RAF Air Defence Museum Facebook page and the RAFCA (The Association of Royal Air Force Control Officers) website have a running theme, that Roy was more than a gentleman, he was a gentle man. 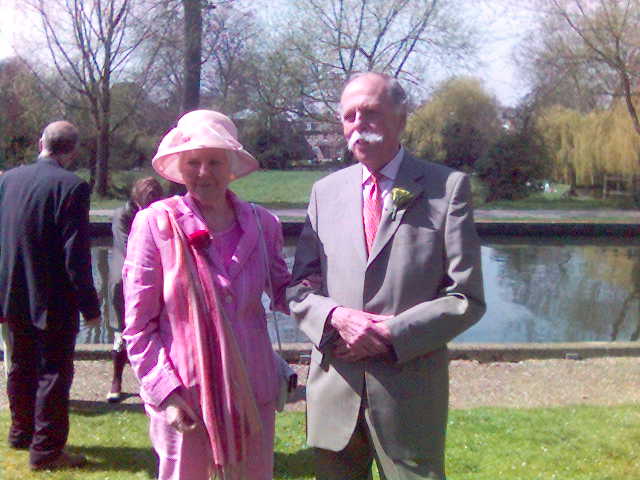 I thought people with impressive moustaches existed in World War 2 movies. Those black and white affairs where stiff upper lipped fighter pilots took to the skies to defend old Blighty from the Germans. I’ve known Roy for almost 15 years and have never met anyone else with such a fabulous dedication to pogonotrophy.

Roy was always dressed correctly for every occasion, and that meant shirt, tie, jacket and trousers. Beyond that it’s the little things I’ll remember. Like the pocket diary he kept in his jacket which was always overflowing with dates, meetings, appointments, trips, schedules and of course family events. I’ve seldom met anyone with such an active life.

The dry sense of humour – when deep in conversation around the kitchen table, it was a highlight to hear a joke or quip from Roy, accompanied with a sly and cheeky smile and a glint in his eye. I’m going to miss that.

Oh, and cake. Tea and cake was important. They brought people together and helped the conversation flow. With fast food and 24/7 everything, I welcomed those moments where we slowed down to enjoy cake and conversation.

Technology and Roy didn’t see eye to eye, yet it wasn’t for his enthusiasm and effort in trying. I’ve lost count of the number of phone calls where I talked him through how to restore his tool bar in Word because “it’s disappeared again” or sitting in his study, crammed with lovely old books, showing him how to format or archive documents on his computer.

Roy’s itineraries were legendary, especially when it came to a tour of friends, with ETA’s and ETD’s, durations, dates, times, places, and always on a need to know basis.

Knives and forks weren’t implements for eating, they were “irons” a word that crops up in my brain each time I lay the table for dinner.

One Christmas I was surprised to see Roy standing the living room for the Queen’s speech, the hustle and bustle of Christmas going on around him, and I further surprised to see him pull off a salute when Liz finished her speech. Although an odd sight, I couldn’t help but think that perhaps if more people showed that kind of respect and dignity, the country would be a better place for it.

There was no need to visit a barber when his daughter, Sarah, did such a fine job every time. I have a variety of photos of Roy seated in our kitchen with Sarah snipping away.

Roy and Sheila had a home that was always welcoming. Old and cosy. Though without a lifetime of memories I felt I grew up there. I was at home, at peace.

Christmas’s spent unwrapping presents in the living room, happy faces, crackling fire, the smell of roast turkey and wrapping paper bombs flying through the air. The dining room table wasn’t big enough to fit everyone around, 15 or more at times, so Roy had a system that involved large table-tennis sized areas of wood placed over the table to expand the seating area.

Whilst this may seem like a simple yet effective task, the practicalities were somewhat odd. A variety of holes on the connecting wooden plinth were marked East and West, and had to be aligned correctly in order for the system to work.

Like the moustache, I thought the game of croquet was played by actors (or posh folk) in Victorian times. So I was delighted to play my first round on their back garden under the blazing summer sun. And when it became too hot we’d erect the gazebo for some shade.

When the kids were younger we had a Crazy Daisy for them to run around – an attachment for the garden hose that whipped around as water shot out of it. Our old dog, Arnie, enjoyed racing around the garden, barking and trying to bite the jets of water.

Oh, and the grass. Such lush grass! A grass connoisseur may state their lawn was 90% moss but I loved how soft and comfy it was to lie on in the summer. I regret not taking the chance to make some wine from the apple and pear trees that always produced such rich and plentiful fruit.

Roy had an unmistakable husky voice, and I’m going to miss his messages left on our answering machine, which he ended as always with “social call.”

I took a photo of their kitchen door last week because it needed to be remembered. Just like tea and cake, the door was a centre piece, a topic of conversation and competition for children and adults alike. I’m sure you may have had one in your own home at some point, and remember it well.

Gentleman and a gentle man.

Roy (or Sqdn Ldr Roy Frederick Bullers, to those who served with him in the RAF) or Papa, known by his grandchildren, was a man of dignity and honour. I respected and admired him for so many things, but above all because he was what I always imagined a true gentleman to be. Old school, the type they don’t seem to make any more. He had a kind and generous soul, with charity in his heart, in every sense of the word.

I never saw him become angry or lose his temper. He was wise and well spoken, good-natured and had a keen mind. Indeed, one thing I learned at the service was that he was considered one of the foremost specialists on radar equipment and history in the UK.

Funeral services are tear-filled affairs, and though I’m not the type to show much emotion, I felt the impact of this loss when entering the church to see it lined with ex-RAF service men, stood in solemn tribute to their fallen comrade. I feel deeply privileged and honoured that my path in life crossed with Roy’s.

A picture of Roy sits on the piano in our hall, and though he is young (pre-moustache), I feel comforted by seeing it there.

One era ends, another must begin.

The family have been decorating Roy and Sheila’s home. I understand the necessity to present a house at its best to sell it, though I can’t shake the feeling that all those memories are being brushed and swept away under a coat of paint. At times I can almost sense the house itself is exhaling a sigh of sorrow as if lamenting its fallen owners.

Boxes of books, trinkets, personal items, clothes and all manner of life laundry are being organised, sorted and catalogued. Charities and museums will benefit from kind donations, and I’m glad part of Roy’s legacy will live on.

It’s a sad time, yet despite the emotional moments around every corner, where I see memories of good times fading away, I take comfort that their home will be handed over to a new family to create new memories. Our time on this wonderful planet is short, and for all our material possessions we gather along the way, they are merely borrowed and passed on for others to enjoy.

So when I stand still in their hallway and take a moment to listen, I imagine I can hear their home breathing in the air of change, pricking up its ears at the potential for sheltering a new family and sharing their hopes and dreams just as it had with ours.

Homes hold memories long after we move on. We remember them in dreams, quiet moments of reflection and funny conversations that start with: “Remember that time when…” And as time ticks by, and our memories of some things fade, those of our homes stay true the longest.

Before I go I’d like to share a poem with you that captures Roy’s passion for the RAF. It was sat in his study and though I saw it often I never really took the time to understand what it meant. 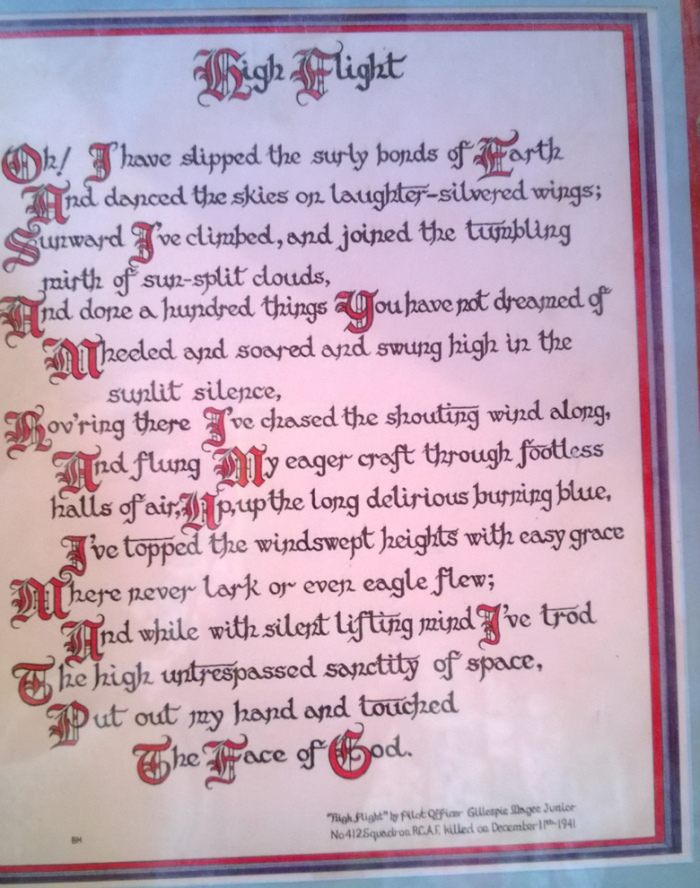 Oh! I have slipped the surly bonds of Earth,
And danced the skies on laughter-silvered wings;

Sunward I’ve climbed and joined the tumbling mirth of sun-split clouds,
And done a hundred things, you have not dreamed of

Wheeled and soared and swung high in the sunlit silence,
Hov’ring there I’ve chased the shouting wind along,

And flung my eager craft through footless halls of air,
Up, up the long delirious burning blue,

I’ve topped the windswept heights with easy grace,
Where never lark or even eagle flew,

And while the silent lifting mind I’ve trod,
The high untrespassed sanctity of space,

Put out my hand and touched,
The face of God.

Whilst I remain dubious on the nature of religion I am keen to imagine those with such belief in a way that makes me smile. To that end I envisage Roy now soaring through deep burning blue skies, twisting and turning under bridges of cloud and halls of air, chasing a sunset and smiling beneath that glorious moustache.

Jump and touch the sky Roy, and maybe one day you’ll take me for a spin through the sun-split clouds.

Thank you for enriching my life and those around you.

I will miss you deeply.

10 thoughts on “House of memories” 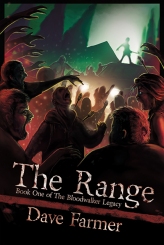