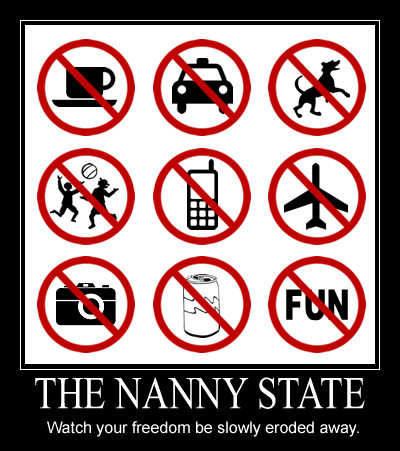 This morning I read on BBC News that the Department of Health in England are pushing for a ban on displays of cigarettes.

They also want to force cigarette manufacturers to put their product in plain packaging in order to drive down smoking rates, discourage young people from smoking and reduce the costs of smoking related illnesses.

To me this smacks of yet another nail in the coffin of our rights and how we shouldn’t be treated like children but be free to make up our own minds if we want to do something that has an element of risk attached to it.

Martin Dockrell, of the campaign group Ash, said there was “strong evidence” that the measures would stop people taking up smoking.

On banning shop displays, he added: “Regular smokers know what brand they smoke before they go into the shop and don’t need a display to remind them. In truth, these displays serve two functions – they promote brands to new young smokers and they trigger sales to people who did not intend to buy. Every morning when the ex-smoker goes into a shop to buy a paper the tobacco companies are waiting for them, putting their brand in front of them.”

I used to smoke. Did so for years. It wasn’t the colourful packs of cigarettes that enticed me to start but curiosity and peer pressure. In my teens and 20’s I spent time drinking, smoking and taking risks like all young adults.If I didn’t want to buy a pack of smokes or a beer then I didn’t. I wasn’t persuaded to purchase something just because of the pretty colours or clever slogan.

Once again we have a government department who wants to control how we live. The Health & Safety laws in the UK are incredibly stupid. For instance I read a report in 2010 about a girl drowning in a river. The 2 police officers on the scene wouldn’t dive in to rescue her because they hadn’t received the right training and were worried about Health & Safety. Right, that makes sense doesn’t it?

I can’t be the only one who is fed up with the government and the Health & Safety Executive assuming they know what’s best for us. They treat the population of the UK like children or like overly protective parents. I see where this is going. At some point we will have to wear bubble-wrap clothes and never leave our homes for fear of damage from rain/loose paving/knocks & bruises/bird poo/tripping over because we’re not looking where we’re going/hurting our backs because we bend over too quickly….sigh….and so on.

Not everyone is addicted to drinking. I suspect the percentage of people who drink alcohol responsibly vastly outweighs those who don’t. So the UK has a problem with young people binge drinking, but why is that? Because the government have allowed companies to sell their product at stupidly low prices. And because there’s no education about drinking, or very little.

Everyone knows that when you eat 1 bar of chocolate you are instantly addicted to it have a need to stuff your face with every type of chocolate and candy you can find. This is why we have so many fat people in the world. Fast food is very bad for you, one sniff of a burger can and you gain 8 pounds! I see news reports about obese children and how we have a generation of fatties who are likely to die before their parents. And whose fault is this? Well it’s not ours but the advertisers.

Caffeine is a drug but because it’s widely used it’s considered OK. Fizzy drinks with lots of sugar AND caffeine are bad for our teeth and send us loopy, especially if we drink 8 cans of Red Bull or other energy drink. Sure, you can buy caffeine free stuff but where’s the fun in that? Besides why should we be given only one choice?

Do you see the pattern?

The trick to scaring people into not consuming certain things is to pay a statistical analyst to interpret results from a research company, and instead of publishing their findings they wrap it all up in a neat report with the well used phrase:

Caffeine, Alcohol, Bad Foods and anything else that you enjoy doing has been linked with:

That’s a scary list isnt it! It’s the same when you read the tiny print inside a pack of pain killers, and it says using this product may cause…. and then it seems to list every possible reaction or illness known to man. And the ban on fun things won’t end there. The Department for Health will soon be so worried about every facet of our daily lives they will issue warnings or place bans on seemingly mundane every day things such as:

We’ve all read statistics like: 1 in 3 people will get cancer, 1 in 10 people like the colour blue or 1 in 2 people are alive or dead. Statistics are a so easy to manipulate and used to sell you stuff. Oh man, next time you see a shampoo advert or age defying super cream take a look at the tiny words at the bottom of the screen. They will say something like: 87% of people liked this product a quite a bit. Study based on 123 people. What?? L’Oreal is basing the popularity of its latest shampoo on the opinion of 107 people? Statistics should be used carefully, especially when it comes to scaring people about eating a piece of carrot cake for example.

If the government or whatever body it currently takes it instructions from want to put cigarettes in plain packaging because of the risks involved then they must do so with other forms of risky consumables. Or why don’t they just leave well alone and stop squeezing our freedom to take risks to the point where the country becomes so miserable the population just ups and leaves to somewhere where liberty is a word you can say out loud without a bunch of government jerks insisting liberty is a myth and they’re only trying to protect you from yourself.

Most of us are able to make up our own minds about how to manage risk. If the government really wants to do something then maybe they should educate kids in school. Just add a new lesson:

Life Skills – the teaching of how to live in the real world outside of the classroom. Subjects will range from paying bills, debt problems, managing money, alcohol consumption, facts about drugs, how to get a mortgage, what foods are probably bad for you…and so on. There are probably schools out there that do this kind of thing, but it doesn’t seem to be working does it? Until we have a solid system like this…

Please PLEASE stop telling us what we can and can’t do!