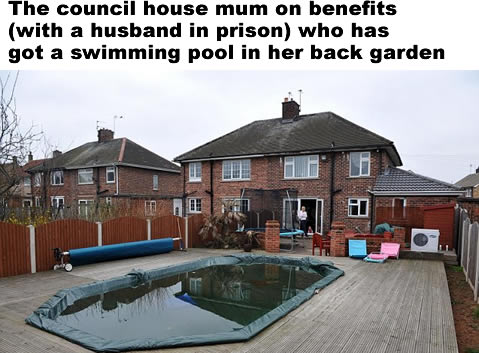 This weeks rant is all about how the world has gone mad! There are always plenty of bad news stories floating around, the Libya crisis, the New Zealand earth quake, floods, landslides, people shooting each other over packets of biscuits and other such tales of woe. I could write about all of them but there are other better articles on those subjects, so I’ve decided to go with something a little more light-hearted but still kinda shocking.

My first rant is about the story of a council house couple, wife claims benefits, husband is in jail, who built a swimming pool in their back garden. I don’t understand the mentality of people who think this is a good idea. It doesn’t matter if Mrs Frost says they paid for the pool out of money from the sale of her husband’s house or not. The fact is it makes them look bad and incredibly stupid. Mrs Frost even admitted it costs a fortune to heat! Tax payer’s are shelling out so these freeloaders can go for a swim! What’s wrong with the local swimming pool?

The pool doesn’t even look that nice, more like a pond than somewhere to do a few lengths. Since they live in a council house they are supposed to be able to return the property to the council in its original state – good luck with that! If these muppets can raise £4000 for a swimming pool then they should have put it toward the rent. Mr & Mrs Frost probably aren’t the only people to do something like this, and it just goes to show that the UK has provided a nice safe zone for scavengers like this to take take take, without remorse or shame for basically stealing the publics money. There are people starving, dying, diseased and broken in the UK, let alone all around the world, and when people like Mr & Mrs Frost think having a swimming pool in their back garden instead of using their money to support themselves…well, it makes me sick.

The full article from The Mail Online can be found here.

Next up…The dad who was arrest for clipping his son around the ear!

It’s not the actual burglary committed by a 13 year old kid that bothers me (much) but the fact his Dad was arrested for giving his son a clip around the ear!

It seems as the police officers read out the list of offenses the dad understandably lost his temper and cuffed his son. Rightly so. In this day and age where kids grow up thinking nothing can harm them and they are beyond reproach for the actions, it is refreshing to know not all parents are soppy hippy’s!

The sad thing is that the police then arrest the Dad for disciplining his own son in what is a very minor manner. They insisted the arrest was for assault of a minor even though parents are legally allowed to lightly smack their children so long as the action is reasonable.

It’s law gone mad. It’s the same old story, the police feel they have to follow the letter of the law but at the same time people like me say they are wasting tax payer’s money and their own time.

I’m not knocking the police but the law. If my kid was caught stealing stuff he’d get the same treatment, although once home he’d be given proper punishment, not violent – loss of privileges, grounded, wash car for a month etc etc.

I suppose the other question is why did the kid go robbing stuff in the first place? For my answer on that subject read my post Run! The teenagers are here! I’m not a strict nut case but I seriously question the morals that have dropped below bad in the last few decades.

The full article from The Mail Online can be read here.

This story made me laugh at first, I thought that couldn’t possibly be true, no one is that stupid. It doesn’t really matter who signed the deal with the contractors to supply stuff to the MOD, or how many people checked and agreed to it, the fact is surely someone should have noticed on the order form or balance sheet or somewhere that light bulbs should not cost £22!!!

Defence Secretary Liam Fox blames Gordon Brown’s idiotic running of the country for the oversight. That was some time ago Liam, what have you been doing since the new government took office? Surely when you move into a new home or get a new job one of the first things to do is to make sure everything is as it should be, take time to get to know what’s going on around you.

It’s funny to imagine how many people saw this kind of list in an invoice or order:

Okay, that was simplified but come on! Loads of people had to have seen that at some point but it took a soldier working in the stores to spot it! Not only that but the MOD were also paying £103 for a single screw that costs around £2 or probably much less.

If that wasn’t bad enough I found it amazing that this news splashed across the pages of the daily tabloids, The Sun, The Daily Mail etc, all said that light bulbs cost 65p. Well, some might but as you can see from the image, Home Base sell them for 10p each! Click here to check it out!! And that would save the MOD and tax payer’s even more cash as they’re energy savings bulbs!

It seems to me that the journalist who uncovered this story didn’t do their homework very well. They did a quick search for light bulbs, saw 65p and ran with that instead of digging for the cheapest possible type of light bulb. Also other newspapers appear to have just copied the same information.

Full article from The Sun can be read here.

That’s my rant over with for now. It seems absurd to think that with the world in constant turmoil from one thing or the other that we can’t put a stop to foolish stuff like this. Isn’t it about time the human race faced up to the fact that we suck at being the dominant species on the planet? Personally I sometimes wonder if that one monkey who decided to walk upright one afternoon should have been clubbed to death by his pals as a bad idea.