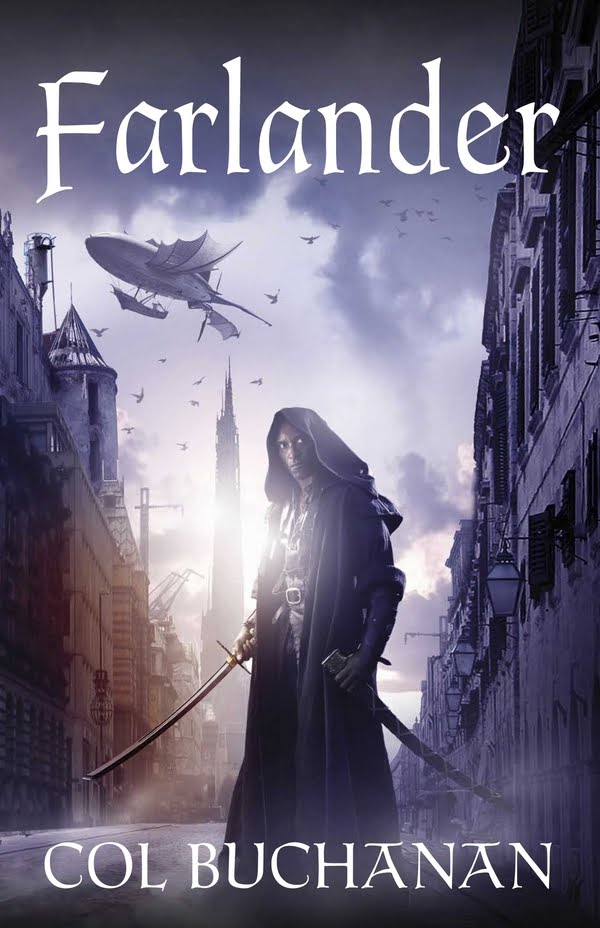 You know the old saying: Don’t judge a book by its cover? Then by what method do you judge it? The synopsis on the back? By reviews posted online? Or reserve any judgement until you have read it? It’s a moot point really as the majority of us are drawn to a book by its cover, thus I was drawn to Farlander by the cover.

This book was recommended by Amazon based on my viewing history. I read the blurb, liked the look of the intriguing cover and ordered it without reading any reviews. Recently I’ve been putting the “don’t judge a book by its cover” theory to the test by reading books that look good, nothing more. It’s been a mixed bag so far, a 50-50 split between the surprisingly good and the dreadful. Farlander falls in the middle in as it tried to do too much instead of sticking to one thing and doing it well.

The first few pages were quite tense and dramatic, I felt instant empathy with the main guy, Ash. Following that it slowed down a little as the story shifted to a different place and characters. It wasn’t the characters that turned the pages but the scene description. It’s clear Buchanan has used his research time well as the surroundings Nico finds himself in are thoughtfully laid out. Some parts are quite graphic and violent which surprised me.

There seem to be 2 main characters, Ash and his apprentice. There isn’t too much description about Ash, but the way he talks and moves conveys his persona very well. Nico on the other hand appears to be a standard young brat, scared of the world type of kid on the cusp of great things, the kind you’d find in any number of other books. Other characters, bit parts really, are easy to visualise but at times they border on the clichéd end of the scale, and this leads me to care less about them.

This is where Farlander works for me. The towns, marketplaces, cities and skyboats are written about with care and real passion. There are times whilst reading I can picture the setting but don’t really find it fascinating or engaging. Khos is a city filled with stuff, noisy streets filled with people, narrow alleys, parks, docks, and stretching further away over the horizon there is a war raging.

The Roshun hideout is excellent, I got a real sense of isolation up in the mountains far from the rest of the warring world. Q’os is a very different place, almost Egyptian in nature, but mixed with Eastern and Asian influences. I got a real sense of claustrophobia when the characters travel the packed narrow streets.

This is where the book loses points. It becomes evident that this is likely the first in a series of books and as such the story is overly long or complicated for the duration. There is a lot of description about politics and world history and such like that could have been better served as fillers for future books instead of dumping it all in this one story. There seems to be a conflict of interest between the characters/scenery/plot/back story. I really enjoyed it and would certainly read the next installment but I felt it would have read better without page after page of stuff that serves as stage dressing without moving the plot along. One small point, Chee is mentioned way too much, and why do they have to drink from leather cups? With the story set in a time where they don’t need to use leather as a cup, even the poor don’t really, this seems to be too much of an overthought to fit in well with the rest of the story.

By the time I had reached the tense action it felt small and insignificant, overshadowed by the amount of description throughout. This is a minor point but worth mentioning as I hope the 2nd book will have a fresher pace without the staleness of the political landscape. I should point out that Farlander is not a book for children, more late teens onwards as it does contain some rather graphic scenes, both violent and sexual in nature. I found this quite refreshing as many fantasy books of this ilk rarely venture into such areas.

It was very easy to imagine the places in Farlander, the sights and sounds and smells were right there in my face. I wish it had concentrated on 1-2 main areas without swapping back and forth between so many angles and points of view. Maybe if the book had been longer this would have been ok. I feel like an English teacher uncertain of the grade to offer; C+ Could do better or B- Keep up the good work! I await the 2nd book with eager anticipation.