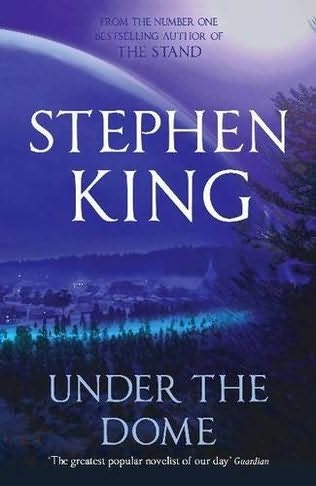 Before I get into the swing of this review I should point out that I’m a big Stephen King fan. I find his characters are incredibly well-developed, his plots are well thought out in the majority of his works, with some exceptions (Geralds Game springs to mind) and he has that unique knack of drawing you into a situation with ease. Bearing that in mind, I can still put together a review without bias.

If you set aside the reasons for existence of the dome itself, Under The Dome is actually more about the reaction of the characters trapped inside. As with other SK books the plot is often just a backdrop around which events take place. Understandably the fact that a huge dome has dropped onto the town of Chester’s Mill does cause panic amongst the residents. And whilst some strive to uncover its purpose it is the way the residents interact with each other that makes this a compelling read.

When I saw the cover for Under The Dome I wondered if SK was cashing in on a recently used theme. The Simpons Movie was based on a giant dome covering the town of Springfield and Gone by Michael Grant followed a similar storyline – an excellent book by the way. However, when I found out that SK had been working on Under The Dome since 1976 I was further intrigued to see what slant he had to offer on the dome/town/trapped idea.

SK fans may find some similarity with The Stand and Cell – end of the world type stuff. The opening scenes are well paced with an interesting train of thought from an innocent woodchuck cut neatly in half as the dome descends. As I mentioned before, SK used his words well to bring characters to life, and in those opening few pages he creates a believable atmosphere of fear and astonishment.

As the story moves on to other characters a back story is revealed with snippets that don’t detract from the flow of the story. The role of hero is shared between a collection of characters who oppose a very clear-cut villain, a guy with plenty of things to hide and eager to control Chester’s Mill. A myriad of supporting roles serve to flesh out the story and provide different points of view, either helping or hindering the pursuit of the freedom by the heroic collective, but also placing barriers for the villain to crack. I read somewhere that Under The Dome has a cast of 100+ characters. I haven’t taken a head count but it seems possible, you’d be surprised how many characters SK uses in his books to tell a story.

I don’t read reviews to help me decide whether to or not to read a book, the cover blurb is enough to convince me either way. When I finished Under The Dome I considered offering my own review on Amazon but plenty of folks had already argued the toss over its good and bad points. I read one review about how SK was out of touch with the younger generation and used a collection of buzzwords, seemingly at random, to describe the actions of the children in Chester’s Mill. I strongly disagree with this. You have to remember that the behaviour of children can vary quite differently around the world, and those in Under The Dome blend very well with the overall setting.

This is pretty much made obvious from the title, although there are plenty of small subplots running through the story, with the main point being a basic power struggle between the good and the bad. There were times when I found some aspects of the plot labouring along without purpose or contributing to the flow of the story, but I had to remind myself that many of SK’s works are about the people and not necessarily about the book title. There does seem to be a lull midway through that could have been edited to keep the pace flowing better.

The connection behind the dreams some of the children have about Halloween and the reason behind the dome is not fully explored. Some readers like to have that room to fill in the blanks on their own, myself included, but the bits of about the dreams early on failed to be connected to anything. It was as if SK ran with an idea to give the reader something more to wonder about, but never hooked it up to the ultimate reason for the dome’s existence. A small gripe I know, but I would have liked to know more about the why and how.

SK thrives on writing about his surroundings, the fictitious town of Castle Rock set in Maine, appears in many of his books. Over the years SK has set plots in and around Castle Rock to the point where the town itself feels like an actual character. When reading a new SK adventure based around Maine it’s a comfort to be able to slip into a world you already know, where you could probably give someone directions to the Shop n Save if asked.

I won’t give anything away about the ending but I will say I found it a little bit…untidy. I understood it, and even found the idea creepy, but it didn’t feel quite right somehow. I don’t feel let down or cheated but there is certainly something missing.

Previous to this I read Duma Key. I loved the imagery he created but half way through it started getting too silly for me, the intrigue and suspense he had built up fell apart and I lost faith in the story’s ability to carry me forward. To some degree Under The Dome had a similar effect. I loved the characters but found the focus slipping away just after halfway. I wanted to read more, turning each page with eager anticipation, but I stopped caring about the dome and the plot itself, they became secondary elements. Maybe that’s what SK wanted to achieve!

It felt like an achievement when I reached the last page and was glad when it finished. Not so with some his recent works, Cell and Lisey’s Story I could have read considerably more of both. Under The Dome is more for a reader who wants to pace themselves through a marathon rather than a sprint. It’s a book that requires your attention, one that you would enjoy more if you took your time with it. Don’t speed read, relax and enjoy the words as they slip from the page and into your imagination.

You can find more about Stephen King at www.stephenking.com – it’s well worth an hour of your time!