“The time has come,” the Walrus said, “to talk of many things.”

He can talk about the finer points of footwear, ocean-going voyages and waxy stuff until his handkerchief is soaking wet for all I care, but I suspect he never had to deal with the volume of junk found floating around our house.

If you ask me the Walrus had it easy.

Just look at that picture above. Some (like me) would call that junk, rubbish, trash, garbage. Others may consider that small collection (tip of iceberg I assure you) a treasure trove of goodies to be cherished. A trip down memory lane perhaps? Um, no. A trip to the dump seems more apt.

Right now we’re prepping our house for the big move. We don’t know when it’ll happen, some say soon, and it’s in the post that’s for sure. But before the postman can deliver us a shiny new house we have the unthinkable task of stripping ours naked.

Maybe you’re like me, dear blog reader, and you don’t realise how much stuff you have until you peel back a layer and take a good hard look. The horror is when the junk stares right back, taunting you: “Just try it. We’ve been a here long, long time, my friend, and we’re not budging for you or your Walrus.”

We have boxes of stuff where the dust has formed a protective barrier to the point where some objects are almost unrecognisable.

Then there are the piles of stuff crammed into corners, flattened somewhat so the everyday stuff can rest on top.

After that we have bags of stuff. All shapes and sizes. Some packed hard with letters never read, old magazines and takeaway menus flyers for places that went out of business years ago.

These bags are mixed with random detritus – an old watch, a few pennies, a broken tape measure and a plastic object I swear used to be very important in the long long ago.

Oh Lord do we have stuff.

I reckon I’m not the first demoralised person to experience an overwhelming desire to procrastinate when faced with a large excavation through the murky depths of the home.

At the top most layer we have recent stuff. The every day stuff – unopened post, bits and bobs that get shifted from one surface to another. Then as dig deepens through the many layers you’re essentially moving back through time. 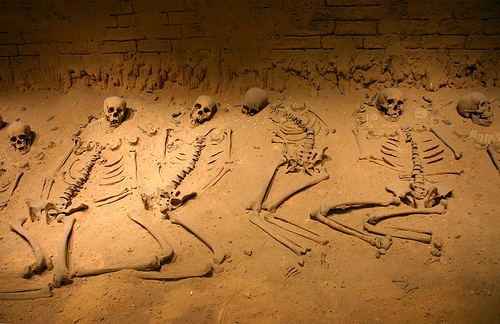 A small (whimsical yet wary) section of my noggin wonders what will be unearthed when we reach the murky and ancient depths of the House Age.

Near the bottom, where dust has compacted to form a hardy sediment, I often mistake a tarnished thingymajig for a Bronze Age trinket.

I’m prone to gaze at it, partly in wonder – where did it come from? What actually is it? How long has it been there? Did a distant relative once accompany Columbus across the wide unexplored oceans with it tucked into their tunic?

But at the same time, I stare at it with a shade of embarrassment because I can’t believe I’ve kept something so pointless for years, even decades.

Moving house should be simple, right? Put house up for sale > look for another house > sell/buy > move.

Oh, yeah. That’s how it always starts. Then later there’s running and screaming.

Sudden flashes of “We can do this!” mostly come at night, mostly.

How hard can it be? You just dig in and everything will work out. Right?

No. No. No. First there’s the plan. Everyone makes a plan.

It involves lists. Lists get the plan done.

Lists are tricksy. They evolve into sub-lists, side-lists, to-do lists, next week lists, after this list has been ticked off but before that list starts list. So many lists they start to form a new layer on top of the every day layer!

There are discussions too. One to one’s, family group talks, action plans, pep talks, rallies, protests, committee groups, outreach programs, initiatives, and the dreaded, red-faced: “Just fucking deal with it!”

That’s when the arguments begin.

This is a little story about four people named Everybody, Somebody, Anybody, and Nobody.

There was an important job to be done and Everybody was sure that Somebody would do it.

Anybody could have done it, but Nobody did it.

Somebody got angry about that because it was Everybody’s job.

Everybody thought that Anybody could do it, but Nobody realized that Everybody wouldn’t do it.

It ended up that Everybody blamed Somebody when Nobody did what Anybody could have done.

Arguments around the House Layer start with an idle debate based around 3 simple principles: 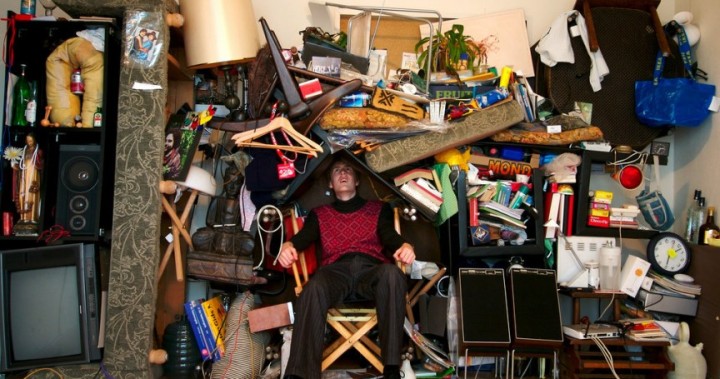 Now I’m not saying our house is like that freak show in the picture above, but sometimes I question anyone’s inability to bin stuff.

3 piles are made. The Keep Pile is easy, as taught at Naive School of Thought. You’re going to want things in the new house. So you make a list.

Let’s look at the Bin pile. Perhaps we can make some headway there.

So then you end up with a pile like this. 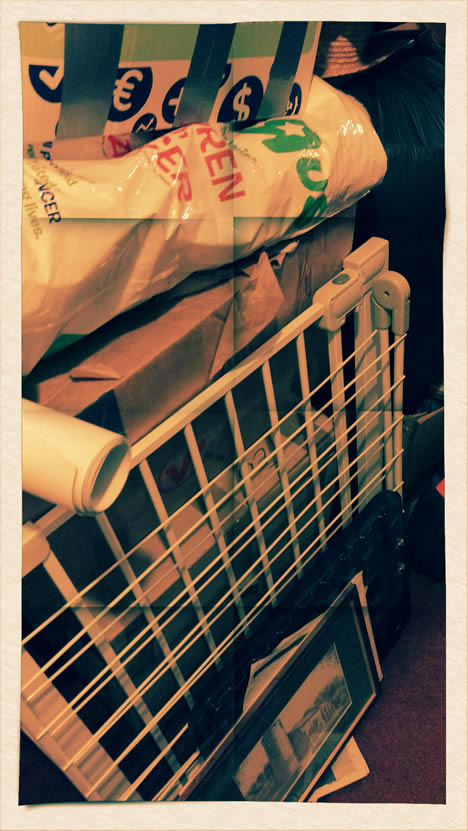 Random crap that huddles together for safety, each item struggling to wriggle to the bottom in the hope it doesn’t get noticed. A bit like how penguins huddle together for warmth.

Now that’s an idea I can get behind with gusto.

First – pack everything we can’t deal with right now into a big truck, ship it off to a storage unit somewhere remote, and forget about it until after the move has taken place, if ever.

Second – hire a huge skip the size of a small valley and be brutal with the Bin Pile. Chuck it all out. Everything left after the Store List gets binned.

Third – now the minimalist theme has been created we throw as much white paint on the walls as possible to create that “blank canvass” look everyone talks about like it’s the golden ticket to instant sale nirvana when trying to sell up.

Then sit back and wait for eager home buyers to start the bidding war.

The problem with that plan, or sub-plan, plan B, last resort plan, or the plan some bright sparks offers up as the Why Don’t We Burn The Fucking Lot Plan? is that no one can truly agree on what to Bin, Keep or Charity. No one knows what to store and what to skip.

And that’s before we get started on which shade of white to use in which room, or how the autumnal afternoon light in the kitchen has such and such effect, and how the entrance hall needs to look warm and inviting, so a warmer shade of white should be used….

Maybe we should just stay where we are?

No. Must move. Must sell house. Must get bigger house for stuff. Get more stuff. All the stuff.

Either we have too much stuff, or our house isn’t big enough for said stuff.

It makes sense that if we’re moving to a new larger house that we’ll have room to put them in. So why not keep them all? We might want to watch Snow Dogs or that straight to DVD £2 movie with actors who were famous 10 years ago then vanished off the face of the planet?

Odd thing is that Netflix and other streaming services have made keeping hard copies kinda pointless, so we don’t need to keep 80% or even 90% of our DVD’s. It grinds my gears when people place great sentimentality on something as unsentimental as a DVD case.

The other problem is this:

I don’t have time for that shit these days.

I should be brutal and ship boxes of unwatched movies and unplayed video games to the charity shop. I haven’t touched them for years anyway so I won’t miss them.

Except at the back of my mind I’ll always know that I was so close to getting all the achievements in Grand Theft Auto and now that’ll never happen!

Doesn’t matter whether I haven’t touched it for a year, the fact is I never will because it HAD to go in the Charity Pile for reasons that were clear at the time but will haunt my nightmares forever. Or at least until the next game I plan not to finish comes out.

It’s the same with all the stuff.

…didgeridoo I never got around to learning to play, but might one day?

…box of old crap that almost everyone agrees is worthless trash except for that one smug bastard who believes it will have a valuable treasure at the bottom, so we best hang on to it and sort later?

…broken but possibly fixable old table lamp that Great Uncle Thingy (you remember, the guy with the wart on his face) gave you for some reason that made sense at the time and you couldn’t say no because he had a limp and always sort of liked you?

I like the rule: If you haven’t touched/used/looked at/played with for X years then you don’t really need it.

But I might want the [insert random thing here].

Okay, I propose we create a new Want Pile.

Now we’re talking. Shall we arrange a family meeting to discuss the new strategy?

We should make a list of everyone who’s attending.

And prepare an agenda, factoring in time for cakes, toilet runs, shouting and slamming of doors.

We’ll need to allow time for everyone to give opening/closing statements for or against the strategy.

Do we arrange another session for a Need Pile?

Maybe, so it counterbalances the Want Pile.

We’ll need a new list to track the contents of these two new sub-piles.

When will I get time to do any quality writing?

I need to finish my book.

11 thoughts on “Life Laundry, Plans, Lists & Too Much Stuff!”