There’s got to be a good reason why so many people say they’d like to be reincarnated as a dog.

Is it because they have an unfulfilled urge to roll around in mud? Could it be that some folks yearn for something more basic like the love a good stick or bone, instead of the chaotic daily dash? Maybe chasing a ball across a lush green park appeals their restless energetic nature? Perhaps the prospect of never having to cook their own dinner is enough to pray for a canine rebirth?

Or, dear blog reader, could it be that dogs simply know how to deal with life?

Sometimes when he’s staring at me, as I take photo after photo, chasing that perfect shot, I get the feeling part of him wants to speak and let me know that I’m doing it wrong.

I suspect the other part of him is mentally rolling his eyes and waiting patiently for the grinning fool behind the camera to leave him alone to snooze in peace.

Ben, like many dogs, has a knack for dealing with life way better than humans. Sure, they can get stressed and have anxiety problems, but for the sake of argument we’re talking about your typical happy bouncy furry pal.

Because Ben can’t talk I’m going to translate his unspoken words and show you why all humans need a little dog time now and then.

Balls, sticks, bones, bits of old shoe, rags, half an apple, a lovely bag of rubbish to roll around in, a snail, plant pot and anything else they can pick up and carry.

Dogs explore the world by sticking it in their mouth. We don’t do this. We’re quite content with sight, sound and smell without the need to shove things in the hole in our faces.

Babies often have dog tendencies, being fascinated with their own feet. I can’t be the only one who wonders what it would feel like to put my foot in my mouth as an adult, or if I’d find it as funny as babies clearly do.

A couple of years ago I was in Cambridge market, sat on an old weed infested waterfall chewing on a hot-dog. I was enjoying the hot-dog, not the waterfall. I wasn’t high or anything. On the other side was a father and his two kids. One of them reached out to touch a stinging nettle.

The father yelled at her. “NO! Don’t touch that! It’s VERY painful!!”

His daughter snatched her hand away, fright glued to her face like, er, glue. I thought that was a bit of an over reaction considering it was only a nettle. I wondered if she’d grow up never having felt the strange stinging, tickling sensation on her skin. Then I thought back to my childhood spent trekking through endless fields, woods, caves and rivers. Many times I had red legs with little white dots up them from falling into a thicket of nettles.

I guess someone told me nettles aren’t that nice to the skin, but I figured it out for myself at some point too. Not that it mattered. Once I discovered it wasn’t the end of the world, or as bad the father in Cambridge declared to his daughter, I wasn’t scared of nettles.

We all need to explore more with all our senses. Dogs do it on a daily basis yet we restrict our senses, denying them true immersion in the world around us. We have toys but when you think about it they’re pretty damn boring. I watch a movie, write, read, play video games and eat stuff. But I don’t jump around with uncontrollable excitement just before and during any of those activities.

Okay, having someone next to you in the cinema jumping, panting and wagging an invisible tail all the way through a movie would be annoying.

But where’s the enthusiasm for being consumed by joy over something simple?

I reckon you’ve all twisted the lid off a tub of body lotion, right? You know the sort – Lush Strawberry Goop, Coconut & Almond Butter Cream, Joopberry & Aloevera Body Paste. They smell good don’t they? Good enough to eat, maybe? Come on, admit it. If that gloopy heavenly smelling junk in the tub was a milkshake or some kind of candy, you’d be shoving it in your face.

So why not have a taste?

Guess what? I do.

Yup. I figure if it smells that good maybe it tastes nice too.

I’m wrong of course. Every time. But it doesn’t stop me from touching my tongue to that enticing stuff when it’s on my finger. I also figure that sooner or later I’ll find one that actually does taste pretty good. Not that I’d actually eat any of it, my stomach would probably moan about it later.

If you drop something on the kitchen floor when you’re cooking it’s likely your dog will give it a sniff then pick it up. Often I’ll see Ben skip out of the kitchen with something in his mouth, only to drop it on the floor because it doesn’t taste good enough to eat.

That makes me happy.

Dogs say: Explore with all your senses and breathe in the joy found everywhere. 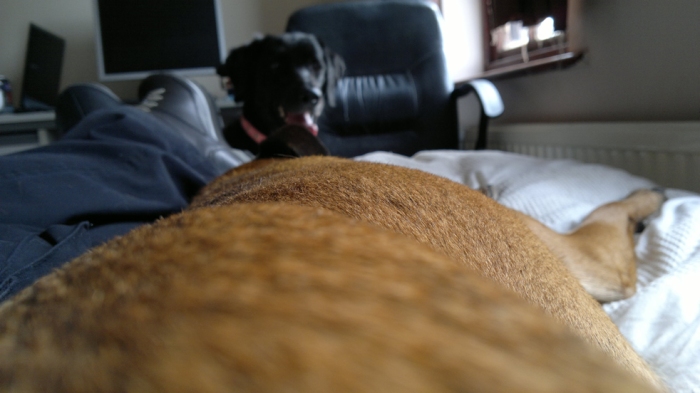 Many years ago I read an article about what it means to own a dog, and one line really struck a chord with me. It went something like this:

“When laying hands on your dog they should show nothing but love, kindness and trust. Your dog should expect nothing less and will repay that affection a thousand fold.”

Good words to live by whatever species we interact with.

Everyone loves cuddles, whether they come from a new-born baby, your wife, husband, lover, an orang-utan, bunny rabbit or the humble dog. Problem is that I don’t see much of it.

Back in 2007 in Cambridge market (hey, I like Cambridge!) a couple of guys were wondering through the crowds, large signs held above their heads with large friendly words: “FREE HUGS!” I watched people trudge by, casting glances of mistrust, wearing bemused smiles, pointing fingers and muttering to their friends about the loony with the sign. 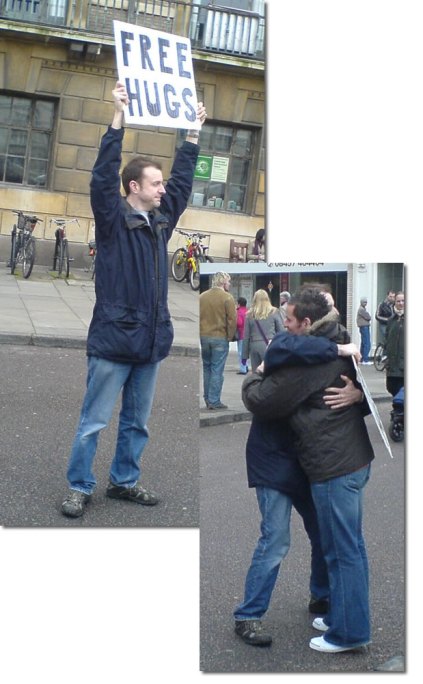 I admit I felt a bit silly and awkward at the idea of hugging a guy I didn’t know in the middle of the city. But my brother-in-law stepped up with a big smile on his face. No worries. One big hug later and I felt the world was a better place.

Glad I caught that memory.

We choose our times for intimacy, whatever level and form it takes. I guess dogs do too but they’re not as reserved when it comes to needing a bit of a cuddle or a hug.

A dog has no problem making it obvious he wants to cuddle up with you. 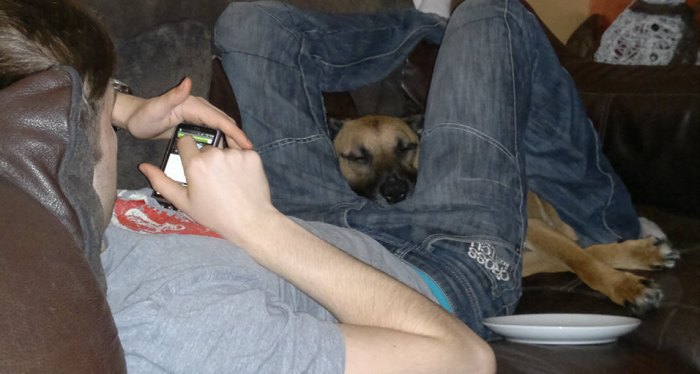 Dogs cuddle, hug, lean, snuggle, slouch, lounge, droop and drop beside their human buddies. I wish we as a race had fewer inhibitions about that sort of thing.

I wouldn’t expect my boss to request a 2 minute cuddle break, or a waiter saying: “Tips in Hugs please!” because that would be weird. Ever since we climbed down out of the trees and learnt to make fire it seems we’ve done everything possible to keep one another at arm’s length.

We no longer have fur so we don’t have regular group grooming sessions.

We don’t gather around the fire in a cave for warmth and solidarity.

I tried hugging my computer screen.

It didn’t hug me back.

Dogs say: Hug, cuddle and love people because we need it more than we admit. 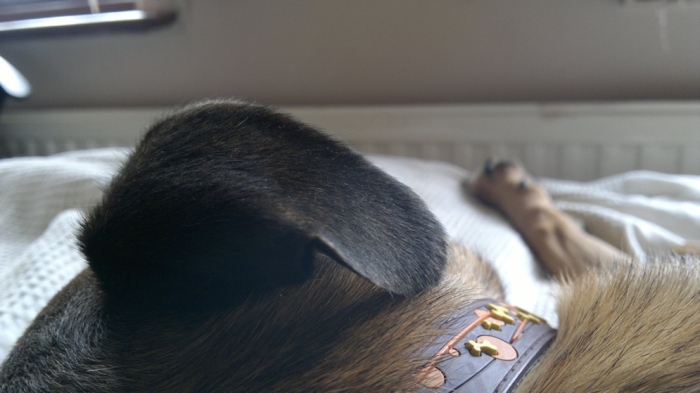 Dogs can relax much easier than we can. Or at least they can appear relaxed. We can’t. Dogs don’t have bills to pay, shopping to drag to the car, appointments to keep, false smiles to wear when someone cracks an unfunny joke, manners to mind (much) and plenty more stuff we humans suffer through.

I guess they can afford to relax.

On the other hand they do things we seldom notice or take for granted: being pleased to see us and making us smile with wagging tails when we return home, comforting us in times of distress, bouncing, barking, dashing and chasing stuff to show they’re happy, and of course guarding the home whilst appearing to be asleep.

Dogs are trying to teach us!

Yeah, they dig holes – “Being helpful is all. You can plant a nice sapling in there now! Or a bone…know what I mean? Always plan ahead, that’s my motto!”

Sure, they rip stuff to tiny pieces – “You always said how much you hated those shoes/dress/socks/duvet/sofa/carpet/toy/everything within reach.”

Naturally they leave us presents in strange places – “You let me out when I didn’t want to go, and shut the door when I did, what did you expect me to do? And no, there’s no chance I’m using the toilet after the stink you keep leaving in it!”

Without fail they drag dirty junk into the house – “Aww c’mon, I’m adding some colour to your living room with that bit of smelly rag I dug up in the garden/trash!”

And finally they show off their ninja skills by sneaking off with a string of sausages when our backs are turned – “Yes! Sausages! Why would anyone leave these unattended for 0.5 seconds? Obviously left them for me, right?” 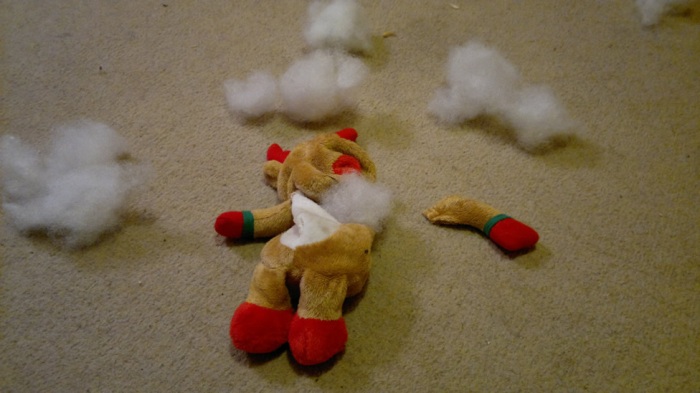 These are all ways of how dogs enjoy life’s simple pleasures.

Yes, even the brutal and savage death of a stuffed Rudolf is a simple pleasure. The looks of guilt that followed that gruesome incident didn’t look quite so enjoyable. And despite the obvious stern words, deep down I knew I couldn’t hold too much of a grudge. If our situations were reversed I’d take great pleasure spinning Rudolf around the living room until hit stuffing burst into the air like little fluffy clouds.

Personally I call this a revenge hit. I suspect Ben had kept an eye on that smug bastard, propped up by the TV at Christmas, lording it over the house with his stitched on smile and cute little red nose. Look at me, I’m the specialness in this house now, not you with your waggy tail and real fur.

It was bound to happen sooner or later.

Dogs say: “Life has so many simple pleasures so try to enjoy them!”

Continuing on from my previous post of inspirational goodness, How to use life’s pause button, I’ll let Ben have the final say on the matter of simple pleasures. 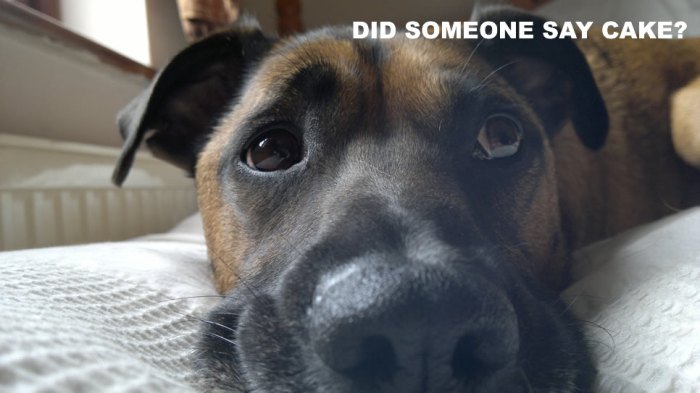 5 thoughts on “Why we all need a little dog time.”