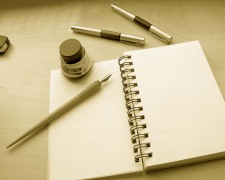 I once read Stephen King’s book titled “On Writing” and found it incredibly fascinating. He takes the reader on a tour of his childhood and inside his mental writing toolbox, all in gloriously rich description that keeps your eyes moving along the words.  I considered that most writers must have a similar writing process or habits. When I started this blog I thought it would be an interesting experiment to see if I could lay down my own writing process.

My fiction is based on a single thought, the “what if…” situation that fuels my imagination. I thoroughly enjoy exploring what follows those three dots, whether inside my own head or chatting away with friends. I’ve never had any writers block, which I consider to be more a paranoia or fear of writing the wrong thing. Just get started, it doesn’t matter how, you can always change things later on.

Whilst I prefer to base my fiction on characters rather than letting the plot drive the story, I do enjoy the process of working out the plot, but never too far in advance since that often spoils the fun. It’s a bit like watching a movie for the first time and someone ruins by telling you what’s about to happen. On the subject of movies, that is how I imagine my scenes, as a sequence of film in my mind’s eye, then I write it down how I’ve pictured it.

Occasionally I do get stumped on description which is where my pad comes in handy. When I’m working on a project I always keep a nice A4 pad next to me. Every page is quickly filled. The contents area strange mixture of well laid out thoughts, doodles, sketches, character names and descriptions and so on.

Even when not writing, and just browsing the net or working on a web project, watching the news I find the pad very valuable for jotting snippets of information down. Unlike the picture (top left) I use a standard BiC pen, preferably blue, I have a pot of them on my desk as I have a habit of walking away and losing them somewhere!

My writing is normally done in silence, however there are times when music can really inspire. At the moment as I write this I don’t have any music on, preferring to listen to the tap-tap of the keyboard, which has a certain harmony to it once you get into the flow. I used to be very much into rock, metal etc when I was younger, but my tastes have widened over the years.

Certain types of music seem to fit certain areas of writing, solid fast dance tracks are energetic when I’m writing some fast paced action for example. Rock music, ranging from U2, Guns n Roses, Oasis, Metallica etc for angry character scenes or where a lot of emotions are in play. And then we have stuff like Carmina Burana by Carl Orff, powerful opera best known for the haunting Old Spice advert and The Exorcist. Some tracks from the Matrix films have been very ear friendly whilst writing, the blend of Opera, rock and techno is very uplifting.

Where, what, when, how and why?

I tend to write firstly from the heart, passion and energy being the tools of letting the words flow freely. I only allow the head to come into play around the edges, keeping things in check like plot. I prefer to let my characters make up their own minds, sure I have a vague idea of where/what/when/how they do things, but it’s up to them how they arrive at that point. It might sound like I have no control over the characters, as if I refer to them as real instead of fictional constructs used to push my story forward.

Characters are imaginary of course, but that doesn’t mean I exercise any control over them. Where’s the fun in that? Once you have created a character fully, and understand every nuance then it’s only right that you let them into your fictional world without rules to follow.

If someone asks a question about any character I have ever dreamt up, and we’re talking hundreds of then, I know the answer without hesitating. I don’t need to think about it, I just know. Where did he….? What was she thinking when…. How come they did that? If you truly know your characters then the answers need no thought, it’s an instant reflex like laughter or catching a ball, you just know how to do it.

My desk is not by a window. I don’t get distracted easily but I don’t enjoy the thought of being distracted when I’m in the zone (more about that later) and everything is flowing beautifully. And I don’t sit down to write if I know I have limited time, I prefer a few hours of dedicated time. Phones are turned off, mobiles set to silent. They don’t allow phones in the cinema and I don’t like them interrupting me when I’m enjoying the next chunk of story unfold before me on the screen.

Everyone has a core.

This contains your morals, ethics, desires, ambitions, knowledge, skills. Some of these are built into you, others are impressed upon you throughout life from experiencing the world around you. You might be good at mathematics, archery, horse riding, skiing, bowling, painting, singing, driving…anything you can think that requires natural talent which is honed by improving that skill. After reading one of my stories I’m often surprised when a friend declares, “You have an amazing imagination” or similar phrase. They insist they couldn’t dream up what they have just read, and I find that fascinating.

My dad told me many years ago (when I was about 10 years old) that not everyone has the ability to imagine, or imagine as much as others. I wasn’t sure I really believed him as it was just second nature to me, if I could do it then surely everyone else could to.

Turns out that not everyone can, or they have a very limited imaginative ability. I consider my main skill (other than web, graphic design) to be Imagination, coupled with the ability to translate that to words on screen/paper. Inside my head I have an endless supply of worlds and characters and what if’s, it’s like having a shower of possibilities cascading through my mind but it never runs out of water. I can reach out and catch a few drops or leap in let the sensation of What If Land wash over me.

Imagination for me is a key skill, it’s part of who I am, without it I would be lost. This may sound very fairy tale bullshit clichéd stuff, but it’s what I know to be true, and therefore it is how I explain it to you.

I write for its own enjoyment, first and foremost. I don’t write for any other reason, other than blogging and yes I enjoy this too. At some point I may decide to publish some of my stuff in a blog. I’d like to be published, not for the hope of making money and being famous, but I would raise a proud smile to see a book written by me on a shelf in Waterstones. I think I’ll stop here with that thought, it’s time to go find a pillow and a book to read before sleep.